One of the most amazing moments every year is to see the first butterfly flying. Like a pixel in the wind, motivated by the warm spring sun, the nervous creature commonly passes by and disappears in seconds.

Spring arrived early this year and rumors have been around that the first species already started to fly. I had to get out and see my first one, too.

After about 15-20 minutes, browsing through my favorite and nearby spot of nature, I got lucky. My first butterfly this spring was a male Common Brimstone (Gonepteryx rhamni). And yes, I also caught it on bits and bytes with my camera, both flying and resting.

According to Tove Jansson’s tale Finn Family Moomintroll the color of the first butterfly sighted in spring can be used to predict the summer that’s ahead. The color yellow, as in my case, indicates a happy summer is ahead.

One moment later, I also witnessed a second species flying. The Small Tortoiseshell (Aglais urticae) was a bigger challenge to track for snapping a photo while it’s resting. However, I got lucky enough to get one decent photo of it, before it continued its flight and disappeared. 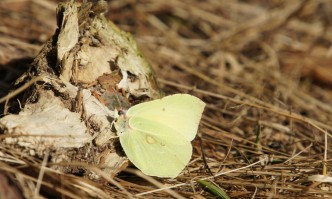 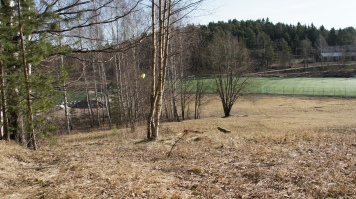 The first butterfly in 2014, a Common Brimstone

The Common Brimstone is a species known for sexual dimorphism. The male butterflies are colored in bright yellow whereas female individuals are almost white, with only a soft shade of lemon.

One thought on “The first butterfly”