Time passes. Before one can realize that summer has started it is usually already over. Late spring and early summer was particularly busy this year since we had to arrange our move to our new home. At the same time also most of the chrysalises that overwintered, either in our fridge or on the balcony, hatched.

I rarely managed to keep the camera close by, most commonly I only saw some butterfly that hatched before taking off. However, I did get a couple shots from some of the species. It was nice to see that the Lime Hawk-moth (Mimas tiliae), which our daughter found as slightly injured caterpillar, managed to complete the metamorphosis.

Like the year before, I also had a couple Poplar Hawk-moths (Laothoe populi) overwintering. It was great seeing the difference in both sizes and coloring across individuals. The Small Emperor Moths (Saturnia pavonia), which I received as eggs from a friend, were true beauties. I remember one afternoon when I returned from work, there was quite some buzzing on the balcony. Due to a couple females that hatched the same time they managed to attract multiple males that were flying around. I’ll get back with some more photos from this species later on.

Color shades of the Poplar Hawk-moth 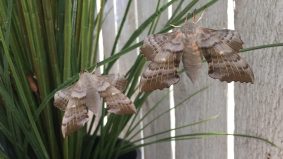 Copula of the Small Emperor Moth 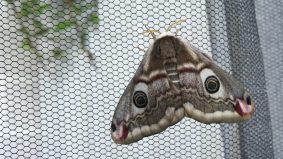