As a kid I mostly came across Small Tortoiseshells (Aglais urticae L.) and some close, equally common relatives. I was wishing to spot some of the larger, but quite identical species.

It took 20 years to make this wish come true, and all by coincidence. Spending time with my family on a children’s playground nearby, I suddenly saw a creature flying nervously. It looked very similar to the Small Tortoiseshell, but bigger.

Thanks to the decent camera built-in into the iPhone, and the fact that the butterfly took a rather long rest on a birch next to me, I got the chance to get some photos. This was of huge help for later identifying the individual at home.

Related to another incident in summer 2013 which got me to reinvent a childhood hobby, this was yet a big player helping to make that decision.

Finding caterpillars of the Scarce Tortoiseshell is definitely one of the challenges to aim at in summer 2014. It’s not an easy target, but that’s what the Butterfly Playbook is all about.

The Scarce Tortoiseshell used to be an unusual wanderer in Finland. However, in summer 2012 a mass migration of the species took place. The same phenomenon repeated itself in Finland in 2013. 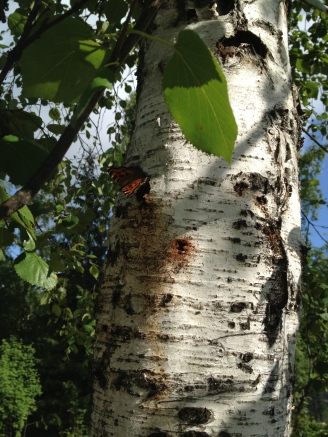 Most butterflies need sunshine for getting active. On cloudy days they seek shelter from rain and predators. Nevertheless, these days provide a whole new challenge to the butterfly watcher.

Especially if you have kids a cloudy day is no reason to stay in. It’s rather a good reason to head out into nature to make some sightings you’ll be proud of.

If you are searching for caterpillars, pupas or even eggs weather doesn’t play that much of a role anyways. In fact, many caterpillar may be more active on a cloudy day or simply doesn’t care about the weather conditions at all. And well, pupas and eggs don’t have much of a choice anyway.

Taking a look back at early summer 2013 I was out with Sienna for a walk in the refreshing drizzle. That day we got lucky as we spotted a Pine Hawk-moth (Sphinx pinastri) resting on a pine next to the trail. Another, easier sighting was a Ringlet (Aphantopus hyperantus) resting on nettles, which I usually check for caterpillars.

Resting butterflies, once spotted, will be easy objects to be photographed or just to take a close view. Take your time with the camera, or give your kids a very special lesson on nature’s creatures.

Pine Hawk-moth (Sphinx pinastri) in disguise on a pine

Pine Hawk-moth (Sphinx pinastri) in disguise on a pine

Getting a close look at a Pine Hawk-moth (Sphinx pinastri) 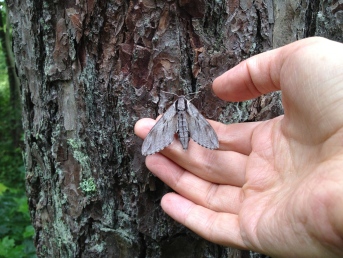 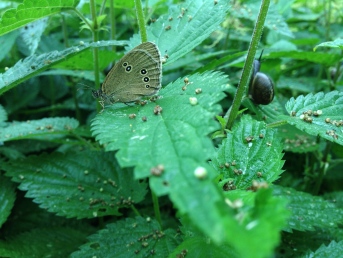 One of the core benefits of butterfly spotting is that butterflies are almost everywhere. This means, when you are traveling, you can take your passion with you.

Another location may provide another biotope, and a new set of completely different species. Assuming there’s nature around, providing food and shelter, there will be butterflies and moths as well. Even the smallest travel can cause major variation to what species can be found.

Some people even go as far as traveling specifically because of butterflies. During winter, there’s not much to do but wait for a new season to begin. Not everyone is settling for waiting when, on the opposite site of the world, another season reaches its peak. So it comes that the true enthusiast packs their gear to head towards southeast Asia, Africa or south America.

Nevertheless, whenever you’re about to explore new places, regardless if that would be a rainforest, the Alps, Lapland or a natural resort next to you, make sure to keep your camera with you. When I started the Butterfly Playbook project I was browsing through photos from trips in the recent past. And I was surprised how focused I was on photographing butterflies.

Last but not least, I remember travelling to Chicago when I was a small kid. Even in a concrete jungle, it was back then when I spotted the one and only Monarch butterfly (Danaus plexippus) I’ve ever seen until today. Hence, it is not only untouched nature which can surprise you.

Globally Lepidoptera, that is the order of insects including moths and butterflies, counts over an estimated 174 000 different species. Perhaps a moment for thinking: How many have you come across so far?

Popinjay on the Maldives

Six-spot Burnet on the Swiss alps

Caterpillar (not specified) on the Maldives

Common evening brown on the Maldives

A photo may not tell the complete truth. Sure, the photos featured in this post don’t lie about the beauty of some of our most common butterflies. However, photos don’t transmit odors.

A small spot of flowers was right next to a leaking dumpster. What our nose may not appreciate can, on the other hand, be highly attractive to someone else. While European Peacocks (Inachis io), Small Tortoiseshells (Aglais urticae)  and a Common Brimstone (Gonepteryx rhamni) where after the flowers, the Mourning Cloak (Nymphalis antiopa) only showed interest in the fluid which leaked out the dumpster.

A moment that definitely stunk, but which was compensated by beauty.

Not all butterflies show interest in flowers and nectar. Some species, e.g. the Poplar Admiral, feed on feces, cadavers of animals, rotten fruits or even human sweat.

The interest in butterflies comes with a variety of benefits. Let me introduce one which probably wouldn’t come to your mind. This post features Noel, one of our twin boys, at the age of approximately 2 weeks. The Red Admiral (Vanessa atalanta) hatched only moments before taking the image.

A couple days before our twins were born I took another walk to the horse stable nearby. I got slightly off track, following a butterfly which I tried to photograph. Reaching high nettles in the middle of a field, I wanted to have a closer look.

First, I spotted a rolled leaf. This is mostly a sign that an insect or spider has built a primitive shelter. In this case, it was a small caterpillar of the Red Admiral. Browsing further through the nettles, I came across many large caterpillars of the same species. Since they were close to entering the stage of pupa, I collected them. I knew butterflies will hatch only a couple weeks later, and wanted to share this miracle with our daughter.

Raising caterpillars needs dedication, though. After our boys were born I had to collect some stuff for my wife from home. On the same trip, I also had to pick fresh nettles for the caterpillars.

The bonus of all the care-taking are the photos one can shoot with “fresh” butterflies. Butterfly raising offers a special moment once an individual hatches. Before being capable of flying the insect first needs to dry its wings.

Take your time to have a close look during this time frame. The butterfly won’t fly away. It’s also the moment for taking a proper macro shot without the rush. Or stage a shot, as depicted in the photo series below.

Please keep the fragility of butterflies in mind. The slightest touch on its wings will result in permanent damage. Place your finger in front of the insect, and allow it to walk on it. Place your finger to the desired spot and allow the “accessory” to take position on its own.

The Red Admiral is a migrating species. If flies from north Africa and southern Europe to Finland in spring for breeding. In autumn, the adults of the next generation head south again as they have not yet learned overwintering in Scandinavia.

Red Admiral being used to decorate a family photo

Red Admiral in company of one of our twin boys

Way before I officially decided to reinvent a childhood hobby, I could not keep myself from taking a close look at a beautiful caterpillar if one came across.

Late summer 2012, our daughter Sienna turned 1 a couple weeks ago, it was time of the large and fascinating hawk moth caterpillars to leave their food plant for digging themselves into the ground, build a cocoon and spend the winter as pupa.

This is the time of the year when common people may spot these beautiful, weird looking creatures as they might pass streets before finding suitable ground for digging.

We often walked along the river which floated close where we used to live back then. The river bed was the perfect biotope for all kind of insects, respectively for spotting them. If was rather usual to see caterpillars along the trails. However, this particular one of the Spurge Hawk-moth (Hyles euphorbiae) was right in the middle of the path. I decided to carry it to softer and safer ground, but not before taking a close look at it. This time, I also introduced the first caterpillar to my daughter.

Having no idea at that time that I’d one day start rearing caterpillars in form of a beloved hobby, it is pretty safe to say today that Sienna will see many more, and even bigger and more colorful species than the one that day.

Caterpillars of hawk moths, also known as hornworms, are particularly suitable for kids. Due to their size and build it’s fun to raise them. They’re also more robust than other caterpillars.

Midsummer 2013, after calling it a day at work I decided to have a walk in the nearby park. My wife, being pregnant in the 3rd trimester with our twin boys, was visiting friends downtown. She had our daughter with her, so I took a walk on my own.

Before I stepped out I took a moment to browse the web. I incidentally had a quick look-up to see when the caterpillars of the Old World Swallowtail (Papilio machaon) could be found in Finland. The time was matching, I decided to give it a try.

I already gave it a shot early summer, trying to raise caterpillars of the Small Tortoiseshell (Aglais urticae). Unfortunately, all 3 caterpillars had parasites. Instead of butterflies, it was parasitoid wasps hatching from the pupa.

I started at the beach line of the sea close by. I kept my eyes focused on milk parsley (Peucedanum palustre) which was growing aside the trail I walked. No success. The caterpillar of the Old World Swallowtail stands out quite well due to it’s colors and size. Hence, looking at the right spot the chances are pretty good to find the needle in the haystack.

Perhaps I’m too close to the windy sea, I thought, and decided to try another biotope. Walking about a kilometer I was close to a horse stable, a good environment for small wild life. Again, my eyes started browsing through milk parsley.

And then, there it was! Right on the edge of the field, feeding on the white blossom of milk parsley, I found one. The rush caused by finding a caterpillar after truly looking – priceless. And yes, right then I knew. It was about time to reinvent a childhood hobby, butterflies.

The colorful appearance of the adult caterpillar acts as warning to bird predators. By absorbing toxins from host plants, the caterpillar of the Old World Swallowtail tastes poorly if attempted to be eaten.